Dr. Robert Kohen: Private Tutoring > Blog > General ACT Information > Should You Take The SAT or ACT? Here’s How To Decide

Once upon a time, many colleges looked upon the ACT with suspicion. These days, however, schools give the ACT and SAT equal weight in the admissions process. Gone are the days when students would simply sit for the test that was more popular in their region of the country. The number of students taking the ACT has risen drastically, and a growing portion of students are even taking both exams.

Given this newfound freedom, which test should you choose? It’s critical to carefully evaluate which exam is best for you. While there is some overlap between the SAT and ACT, they are fundamentally very different. Because thoroughly preparing for each can take many months (make sure to start early), it’s generally best limit yourself to preparing for only one. If you prepare for both, you sacrifice valuable time that is often better spent developing your academic and extracurricular profile. 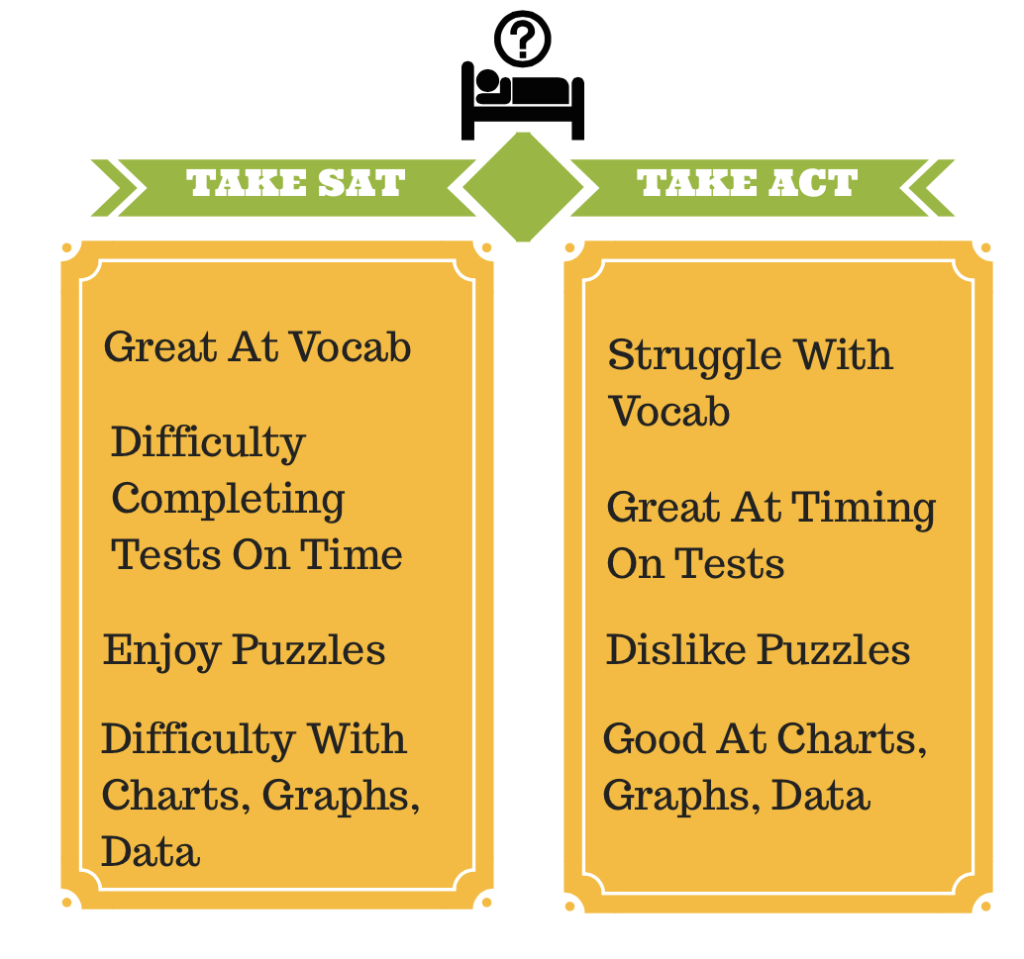 The best way to determine which test is right for you is to take a full-length, timed practice test for each exam. Make sure the exam is an official one written by the actual test makers (you can find these on the test makers’ websites). When you score the test, compare the two scores using the SAT-ACT concordance table (also available on both test makers’ websites). If you score significantly higher on one exam, that’s usually the best exam to take.

If you perform equally well on both tests, consider which you found more enjoyable. The more enjoyable the test, the more effort you’re likely to invest in preparing for it, resulting in a higher final score.

In addition to taking a practice test on your own, here are some of the key differences between the exams that can help you best decide which is right for you:

• Unlike the SAT, the ACT does not test vocabulary. While a difficult word might occasionally appear on an ACT reading passage, the SAT is packed with advanced vocabulary. It shows up on vocabulary questions, dense reading passages, and even in questions and answer choices. If vocabulary is your major strength, lean toward the SAT. If it’s a major weakness, consider the ACT.

• The ACT allows less time per question than the SAT. While many students can finish SAT sections and still have time remaining, students taking the ACT often struggle to complete the sections in time. If you’re a particularly slow test taker, the SAT may be a better choice.

• The SAT is, at its core, a reasoning test, whereas the ACT is more a test of content. Questions on the SAT resemble puzzles and require logical thinking. The content on the ACT is often more advanced than the content on the SAT (it includes trigonometry, for example), but it is presented in a much more straightforward manner. Students will often prefer one test’s approach to the other.

• The ACT contains a science section. This section is very different than anything on the SAT, which does not test science. Practically no scientific knowledge is needed to do well on the ACT, however, as the test is primarily concerned with your ability to quickly analyze data like graphs and charts. Still, the science section can be a major factor in score differences between the SAT and ACT.

Use these tips to help decide which exam is best for you. While it may take some time to figure out which test is the right one, you won’t regret having done so. Carefully choosing between the two exams can help ensure you achieve your optimal score, maximizing your chances at college admissions and scholarships.

By the way, if you’re an international student, you might be better choosing the ACT.

Note: The SAT is changing in 2016. This article is for students deciding between the ACT and the current version of the SAT.