What’s so tricky about “-ing” words? They look like verbs, but they don’t grammatically count as verbs. Instead, “-ing” words can either be used as nouns (“gerunds”) or as adjectives (“present participles”). Here’s an example: 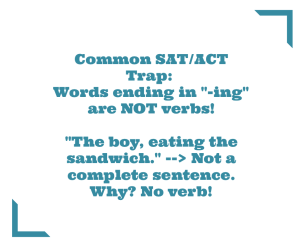 Running takes a lot of energy. – > Here, “running” is being used as a noun. It is the subject of the sentence; it is not a verb.

The boy, running away from house, felt free. – > Here, “running” is being used like an adjective to describe the boy; it is not a verb.

Running clocks are the best types of clocks. – > Here, “running” is being used like an adjective to describe clocks; it is not a verb.

The boy, eating the sandwich. – > Subject – the boy, check. Verb? Eating? Nope, that’s an “–ing” word. Not a complete sentence.

Don’t fall prey to this common trap. Be on the lookout for “-ing” words – they’ll often be masquerading as verbs!