Both the SAT and ACT allow a calculator on the mathematics section, so it’s important to know how to get the most out of one come test day. Note, however, that the calculator is not allowed on any other sections—including ACT science.

What Type of Calculator Is Allowed?

The SAT and ACT place relatively few restrictions on calculator use. The ACT is somewhat stricter than the SAT, prohibiting calculators with CAS (“computer algebra system”) functionality, whereas these are generally allowed on the SAT. Most popular high school calculators, like the Texas TI-83 and TI-84, are permitted. Always make sure to check, however, that your model is kosher before you sit for the exam. You can find a complete list of permitted calculators for the ACT here and a similar list for the SAT here. The following graphing calculators are generally allowed on the SAT:

What’s The Best Calculator To Use?

No matter what type of calculator you’re using, make sure you’re familiar with it before test day. Know when to use parenthesis, for instance, and how your calculator processes the order of operations. 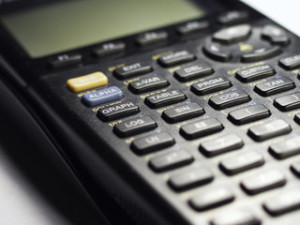 When Should I Use The Calculator?

Most, if not all, SAT and ACT math problems can be solved without the use of a calculator. That said, not using a calculator at all will take more time and can often lead to more careless mistakes. It’s important, then, to know when and when not to use the calculator.

In general, take a few moments to understand each question and plan your method of attack before picking up the calculator. Don’t rely on your calculator for the big picture problem-solving strategy—this part is up to you. You should be especially wary, for instance, of problems that look overtly complex. Many of these can be solved quickly with a simple shortcut, and thus should not be immediately plugged into the calculator.

Once you’ve figured out how you’re going to solve a problem, then you can use the calculator to quickly work through any arithmetic. Doing so is a good idea because it’s faster than solving on paper and less likely to lead to mistakes.

Beyond simple arithmetic, there are a couple of powerful shortcuts you should know about that can speed up your work on the SAT or ACT. Pretty much everything else, on the other hand, you can solve better without the calculator.

Calculator Shortcuts For The SAT and ACT

Least Common Multiple and Greatest Common Factor: Need to find one of these quickly? Don’t construct a time-consuming factor tree. Instead, hit “Math,” go to the “Num” menu, then go down to “8:lcm” for least common multiple or “9:gcd” for greatest common factor. Enter the two values, separated by a comma. If you’re trying to find the least common multiple or greatest common factor for more than two values, simply use this function to find the LCM or GCF of the first two values, then solve again for THAT result combined with the third term, then solve again for THAT result combined with the fourth term, and so on. Once you’ve worked through all your terms, you’ll end up with the LCM or GCF for the set as a whole.

Combinations: When finding out how many ways you can choose r number of selections from n number of things and the order they’re arranged in doesn’t matter, enter the total n number of objects, then hit “Math,” go to the “Prb” menu, then select “3:nCr,” then enter the number of r selections. Then press enter for your solution.

Calculator Shortcuts For The ACT Only

Arc Functions: When given a sine, cosine or tangent value, you can solve for the initial angle by taking the arc function. Simply press “2nd,” then sin-1, cos-1 or tan-1, to find out the initial angle. The angle will either be in radians or degrees—you can choose which by using the “Mode” menu. Remember that arc functions result in only one of the possible angles that could produce the given sine/cosine/tangent value, so be careful here.

Radian-Degree Conversions: Need to convert radians to degrees or vice-versa? Hit “Mode” and then select radians or degrees to specify the type of value you’d like to end up with. Then enter the starting value and press “2nd,” then “angle,” then “1” if the angle is in degrees “3” if the angle is in radians. Press enter to see the converted value.

While calculators can’t do the big picture thinking the SAT and ACT require for you, they can help minimize errors and speed up your work. Look for an approved graphing calculator with the above functionality for the exam, become familiar with it, and then use it to your advantage on test day!

Want a Free List of All the Math Topics That Have Recently Appeared on the SAT or ACT?

For a free list of all the math topics that have recently appeared on the SAT or ACT, and/or for answers to any other questions, you can reach me at robertkohen@koheneducationalservices.dream.press or 212-658-0834.