The ACT essay is changing. The new (aka “enhanced”) essay, which will first debut on the September 2015 exam, looks very different from the former essay. It lasts 40 minutes (up from 30) and features a prompt and three “perspectives” on it. Your task is to write an argument that responds to the prompt while addressing and evaluating the three perspectives.

You can see what the new essay and scored examples look like here. The ACT has also released a second prompt as part of a new practice test, available here. For additional practice, check out these ten sample essay question prompts I’ve written. 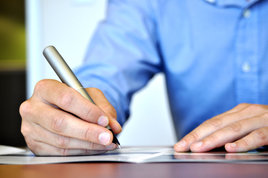 Here’s how you can ace the new essay:

2) Leave 3-5 minutes at the beginning to plan your essay and at the end to review it.

4) You must refute possible counterarguments. The ACT looks for this on every essay. This is a sophisticated technique that helps strengthen your argument. You should respond to any counterarguments presented in the three perspectives as well as ones you think of on your own.

5) Make sure to mention how each of the three perspectives relates to your argument. Do this as you introduce the various parts of your argument in the middle two or three paragraphs.

6) Make your examples very detailed by including dates and proper names, but always make sure the examples are used to support your argument. It’s OK to fudge some of the details – the test makers are not allowed to grade you on the truth of your claims. It’s probably not a good idea, however, to declare that Pearl Harbor occurred in the 1700s.

9) Use a varied sentence structure. Don’t start every sentence with the same word, and make sure to vary grammatical structures between sentences. One trick to help is to throw in an occasional rhetorical question. “How would the early Monicaros have felt if they too lacked freedom?”

10) Make sure each new paragraph begins with a strong and clear transition.

11) Use active sentences rather than passive sentences. “He ate the cereal” is better than “the cereal was eaten.”

12) Avoid using “I.” While you’re technically allowed to use “I”, your essay will sound more formal and authoritative without it.

13) Similarly, avoid overtly political or religious arguments. Although these technically shouldn’t influence your reader’s evaluation, remember that your reader is a human with religious and political views.