Most ACT Science questions only test your ability to interpret scientific data and viewpoints. Some, however, also test your knowledge of scientific subjects such as chemistry, biology and physics. Because these questions are drawn from such a wide range of topics (basically anything you’ve studied in high school science), it’s impossible to predict what they’ll ask about. 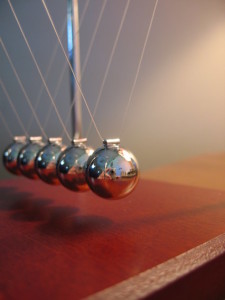 You might see anywhere from 0-4 questions on any given test asking about these topics. Since there are only 40 questions on ACT Science, questions about actual scientific concepts you’ve studied in school usually don’t make up more than 10% of any section. Missing them should only have a minimal impact on your score then. Nevertheless, you want to try to answer these questions correctly—if only because they’re often some of the easiest questions on the test to pick points up on. Why?

There is a very easy method to solve these problems, one that doesn’t involve reviewing every single topic in biology, physics and chemistry. That method is using your own intuition.

Next, try to reason out which answer choice would make the most common sense. Very often these questions can be solved without technical scientific knowledge, but with intuition alone.

Let’s look at a hypothetical question:

How does allopane gas affect the planet?

First look back to the passage – does it tell you what the gas actually does? Yes, this (hypothetical) passage tells you the gas heats the planet. Eliminate A and B – now you’re down to two possible answers, C and D.

You don’t really know how allopane gas heats the planet, but between C and D, which sounds more plausible?

Let’s look at C. UV radiation comes from the sun – think of the UV protection in your sunglasses. Things from the sun typically heat the planet. Would sending this back into space—i.e. getting rid of it, heat the planet? If anything, it would probably do the opposite, or cool things down.

How about D? If the gas absorbs heat from the earth’s surface, would that make things hotter? It definitely sounds possible – and it certainly sounds better than C!

While you won’t be able to solve every ACT science question that asks about actual science this way, you’ll be able to solve many of them. So the next time you see one of these questions, don’t panic and skip it. Instead, think of what the passage is saying as a whole and try out your own common sense on the answer choices. More often than not you’ll be able to figure things out without even knowing the actual physics, biology or chemistry behind the answers!